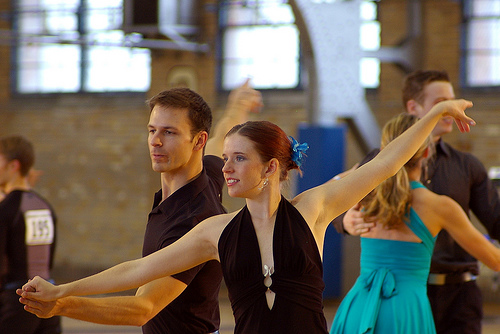 This is a guest post from: Jenny Lang is an author, wife, homeschooling mother, investor, and pennypincher extraordinaire. She writes about smart financial living at the Frugal Guru Guide. Keep an eye out for her upcoming book, the Frugal Guru’s Guide to Everything Auto. Find her on Google Plus

My sophomore year of college, I became introduced to ballroom dance and was instantly obsessed.  I worked like crazy and placed well, but by the next year, it became obvious that I needed private lessons to reach the next level.  These would cost me $60 an hour, which is no joke for a college student.  I was making my way through college with 50% scholarships, 30% parental contributions, and 20% paying my way, and any additional expenses would need to be covered by me, personally.

I was already working two jobs.  My first was at a fast food restaurant making below current minimum wage (even adjusted for inflation) 12 hours every Saturday.  I was also working about six hours a week making slightly more as a “computer lab assistant,” which basically meant that I kept students from coming into the open-access computer labs and stealing or damaging the equipment.  The advantage to the second job was that I was essentially being paid for doing homework.  But I needed something that made way more money on a per-hour basis than either of these jobs.

I had already become a better dancer than any of the “professionals” at the local chain dance studio.  (The bar was very low—they averaged six weeks of training.)  In fact, among all professionals in the community, only two independent dancers were still better than me.  I thought, why not use my dance skills to make a profit?

First I had to find a location, the closer to the university the better.  I checked out several possibilities, from a VW hall to a YWCA, but eventually the place with the best floors and per-hour price with good room availability ended up being a community center.  For $12/hour, I could have the floor.

I set my rate through research.  The local chain studio charged $65 for an hour of private lessons, one group lesson, and one party, and they had to be purchased in packages.  The two good individual instructors charged $35 and $55 per hour.

It was the start of the spring semester, so I decided that wedding couples were my easiest target.  They are willing to pay, they have a short timeframe with definite goals, and they were the easiest demographic to hit without going into the world of professional/amateur competitions.  They were also not being targeted at all by the other professionals, who really weren’t interested in teaching them.  I set $30/hour as my rate.  Given the location, my skill at the time, and the funds available to most wedding couples, that was an attractive but not too bargain-basement rate, and I could clear $18 per hour that way.  I also decided to have two approaches—the fully choreographed routine and the simple “here’s the basic and two other steps and here’s a dip at the end” approach.  I’d feel the couple out and see if they had the time, willingness, and money for the first, which would give the full fairytale effect, or whether they mostly wanted something to do during the first dance and not humiliate themselves.  The first would take six to twelve lessons, depending on song length and ability—the second would take only four to six.  So that was a total value of $120 to $360 per couple.

I made a website using my university for free hosting (which was much more expensive back then).  I put up some content and contact information, changing my cell phone message to sound like a business.  I designed and made flyers for $50 and put them on every free bulletin board in the university.  Then I paid to have my flyer included in the local wedding exposition’s freebie bags.  I also put the word out with one of my coaches, who had more people approach him than he cared to teach.

The result was that I made back my investment in three weeks and was able to teach enough couples that I could cover my weekly lesson with a bit left over for the rest of the semester.  If I’d had more time, I could have taught more, as there was an ample market, but most of the couples wanted to practice early in the evening on weekdays, when I had very limited time with upcoming homework, as I was carrying a very heavy load of classes.  It didn’t replace either the fast food job, which was during the day on Saturday, or the computer lab job, which, as I had said, was paid homework.  I was leaving the area when I graduated, too, and it wasn’t the kind of job I could take with me, so there was no reason to kill myself to make it as large as possible, either.

But aside from the lessons and spending money, the job taught me that it was possible to “shoestring” a business with very little investment and that there were plenty of money-making opportunities out there if you think strategically.  It also taught me about the limitations of essentially doing work for hire, in which what I get paid is a function of how many hours I work.

Now I’m starting a new business—my forth, if you count all my side gigs–and looking for true growth opportunities.

Editor’s Note: I asked Jenny to write this story because I think it is a great example of how you can hustle during college and help to pay your way, or to pay for something you love to do (ie. dance lessons!) In fact, Jenny is still hustling as a busy mom of three and an entrepreneur!

Too often we get caught up on applying for scholarships and resort to taking out student loans, when there are far better options. You can start a business as Jenny did, or you can sell unwanted furniture, re-sell used textbooks, become an affiliate product manager, sell ad space on your car, or a host of other ideas. The more you are willing to hustle, the better off your financial future will be!

8 thoughts on “My College Business Start Up”