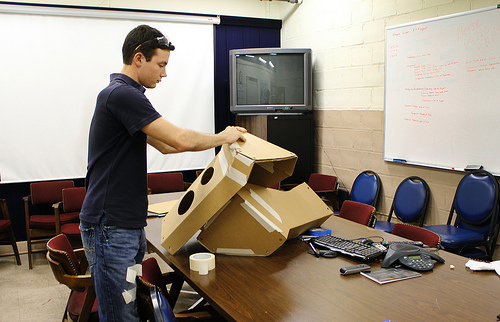 I have dedicated the Money for College Project to helping you find more money for college, and finding better ways to manage that money while in college, and after graduation. I have railed against student loans, and the many negative consequences that can come along with them.

Rather than another tirade against “The Man” I wanted to share with you a recent story that I heard while speaking with a student on my college campus. It might surprise you to see how some students view student loans, and I hope it is a wake up call. It was for me anyway.

When Jake wakes up every morning, he is even further in debt, even though he spends no money during the day. How is this possible? He has unsubsidized Stafford Student Loans that are accruing interest while he is enrolled in school. Because he does not have  part-time job, and has elected to focus his energy 100% on school, he chose not to pay the accruing interest on his student loan, and therefore it has continued to increase daily for the past two years.

Jake is a typical student. He likes to sleep late, he grumbles about going to class, he pulls all nighters in the library before big exams, and he loves college life. His big secret however, is that he already has over $28,000 in student loans as he nears completion of his second year of college. He’s not even half-way done.

How is this possible? He maxed out his Stafford Loans ($5500 for Freshman Year, $6500 for Sophomore Year), he received a Federal Perkins Loan ($4,000), and he took out a private student loan with this parents ($12,000). All told, he already owes back the price of a brand new SUV, and he has not even finished his Sophomore year of college.

I wanted to dig a little deeper and see what led Jake to the decision to take out so much in student loans.

I asked Jake about when he first made the decision to attend college. He said that he had applied to multiple schools, but he finally made the decision to attend our college because of the excellent Engineering program. The average starting salary for a Civil Engineer (his program of choice) is $44,000 for graduates of our program, and there is an 83% job placement rate. (I was actually very impressed that he knew these figures, and it gave me some hope!)

I asked further about his financial aid package, and he noted that when he received it, he was initially elated. His financial aid package was enough to cover virtually all of his tuition and fees. Then he looked a little deeper. $7500 of his awards were from student loans; money he would have to pay back. He had also not factored in the cost of a meal plan ($1450 per semester), required on-campus housing ($2900 per semester), and a required laptop for his Engineering program ($1200). With all of these extra fees added in, he began to realize that he still needed more funds to cover his costs.

He said that he approached the Financial Aid Office to see what help they could offer him. His FAFSA had already been evaluated for federal aid, and all of the Academic scholarships had already been awarded, so Jake was left with only one option: More Student Loans.

The process was virtually the same for his Sophomore year. He was able to score a small scholarship through the engineering department, but with the rising cost of tuition, and extra lab fees for some of his courses, that was quickly eaten up.

This brings us to the present, with Jake stuck $28,000 in debt, and only half-way through his degree program.

The more we talked, the more I could tell that Jake was resigned to his fate. All of his friends had student loans, so he saw no harm in it. He wanted to be a Civil Engineer, he wanted to graduate, and this was the only way he knew how.

I finally worked up the nerve to ask Jake the big question: “Is your college degree really worth the student debt that you will have when you graduate?”

Jake said an emphatic yes, and I knew he would. I knew that almost every college student would say that when asked. What else would they say? “Well not really, but I figure I have no other choice and I have to have a degree to get a job!” Oh wait, I’ve heard that one too!

What would I recommend to Jake and any other student in this situation?

I would ask them to take a step back, and take a serious look at their situation. Start by looking at real numbers. Let’s assume that Jake gets a job paying $44,000 (it is a big assumption). After taxes his take home pay will be roughly $2750 per month. Let’s assume that Jake’s student loan consumption continues at his current rate and he graduates with $56,000 in loan debt. The average loan payment is $50 per $5000 borrowed. Jake is looking at a $560 per month student loan payment. That leaves him with only $2,190 per month to pay all of his other bills, save for retirement, pay for his health care premiums, put gas in his car to get to work, and enjoy life a little bit.

Not exactly a rosy financial picture for our friend Jake.

Then comes decision time. You might ask “Is the juice really worth the squeeze?” Should Jake and other students like him remain in school, continue to borrow loans, and struggle financially once they graduate while they perpetuate the cycle of college graduates who are in over their heads in debt?

I honestly don’t know the right answer, but I can see that something needs to change.

I think we need to have a serious conversation with our next generation of college students BEFORE they enter into college and walk them through this scenario. Help them to see how much student loans can sidetrack them financially for years. Help them to find a major that will allow them to get a job. Help them choose a school that has a good track record of placing their graduates in jobs that actually pay a decent salary. Help them understand how to find FREE financial aid and avoid taking out student loans.

These conversations are not easy, but I believe they are essential to help our future generations avoid bankruptcy and our country avoid utter financial ruin.

6 thoughts on “Is a College Degree Worth Taking Out a Student Loan? Student Story”