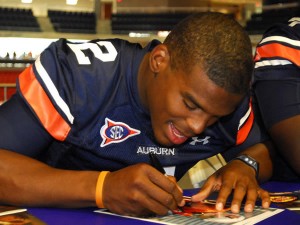 If you follow college football, you are likely well aware of the NCAA’s recent campaign to root out all forms of corruption and wrong doing within it’s member schools. This action has caused power house schools such as The Ohio State University, to lose their coach, some star athletes, scholarship positions, and money. The pending investigation with the University of Miami is rumored to contain “the death penalty” which would force the football program to actually miss an entire year of football, thus erasing their ability to perform and recruit for the future.

One of the main sources of wrong doing in all of these cases, is the rule that NCAA athletes cannot receive compensation of any kind from outside sources. Simply put, NCAA athletes cannot get paid to do athletes. This debate has raged back and forth for years, but it has recently come to a head when it became known that NCAA football players receive millions each year from federal grants.

A recent article from the USA TODAY Sports sheds light on the fact that many NCAA football players on full scholarships which include tuition, room and board, and books, also collect thousands of dollars each semester in federal grants. The article referred to a study done through the Des Moines Register:

“Data from 23 responding schools in the Big Ten, Big 12 and Southeastern conferences….revealed that 1,064 football players at the 23 responding schools last year received a combined $4.7 million through Pell Grants, a federally funded program “that provides need-based grants to low-income students,” according to the U.S. Department of Education.””

College financial aid offices are allowed to do this because Pell Grant eligibility is based solely on a student’s “financial need” as determined through their FAFSA application. Financial aid is also awarded based on a “Cost of Attendance”. For example: a college athletes tuition, room and board, and book costs might total up to $31,500 for the current academic year. That amount would be covered by their athletic scholarship. However, their “Cost of Attendance” also included personal expenses, transportation, and supplies allowance, for a total of up to $36,000. The difference of $4,500 can be received in federal grants, such as the Pell Grant.

One proposal being floated around college campuses is to require that all NCAA athletic scholarships be awarded for the full cost of attendance, thus eliminating college athletes from receiving money from federal grants.

What do you think?

It seems to me that this would be an admirable solution. The increase in athletic scholarships would mean less money to go around for additional athletes, but it might also preserve an already taxed federal grant system. After all, these college athletes on full athletic scholarships already have their essentials covered. The Pell Grant is designed for “needy, low-income students”. If an athlete does not have to pay for tuition or books, and he or she has a place to stay and unlimited access to a dining hall for food, why are we giving them Pell Grants???

Do you feel the same way?

Do you think we should continue to give Pell Grants to NCAA athletes on full scholarships?